Learn to be a world class flutist

The IU JSoM Flute Academy is committed to the growth and achievement of each student, providing both inspiration and tools to successfully pursue the flute. All levels and ages of playing are welcome and valued at the Flute Academy, from beginner to professional.

The IU JSoM Flute Academy is expanding its offerings to accommodate the needs of flutists seeking the highest quality online program, welcoming players of all levels to join our pre-college and adult flute class, from any location. 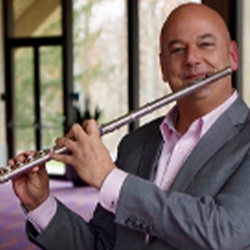 Thomas Robertello was appointed associate professor of flute at the IU Jacobs School of Music in 1997. A former member of the Pittsburgh Symphony, The Cleveland Orchestra, and the National Symphony Orchestra, he has performed as guest principal flutist with the Chicago Symphony, Los Angeles Philharmonic, Dallas Symphony, Chicago Philharmonic, Louisiana Philharmonic, Houston Grand Opera, and Nashville Chamber Orchestra. 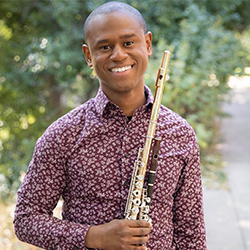 Brice Smith has performed in several professional ensembles, including the Colorado Symphony, New World Symphony, and National Repertory Orchestra. As a soloist, he has performed at the John F. Kennedy Center, with the Arkansas Philharmonic, and with the University of Michigan Camerata Symphony Orchestra.

Smith has taught master classes and lessons for the University of Arkansas, Adams State University, Siena Heights University, the Crescendo Detroit program for young students in the performing arts, and, most recently, was a guest artist and lecturer for the Texas Summer Flute Symposium.

He is an executive board member for the Texas Flute Society and has served as artistic and development assistant for the Crested Butte Music Festival, as well as student engagement specialist for the Entrepreneurship Center for Music at the University of Colorado Boulder.

All of our applications are completed online. There is no paper application available. Click on the registration link and follow the prompts. Your email is your user name. Create a password and retain for future access to the account. You can complete the payment process with a credit card or check following the instructions on the application.

Flute Academy has a rolling registration.